How can you help the refugees? Click here to Donate now!

If you or someone you know has been impacted by the government shutdown. (915) 298-0353.
Our mission is to combat the hunger crisis in our region by strategically procuring and distributing nutritious food through community partners…because no one should go hungry. 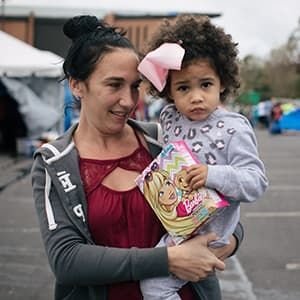 Hunger can be hard to spot in America. You can’t always see it—but that doesn’t mean it isn’t there. Our country is affluent by global standards, yet there are families in every county in the U.S. who can’t afford to stock their cupboards with the food they need.

If we can debunk these five myths about hunger, we can help raise awareness of the problem and loosen its grasp on people in need:

MYTH: There’s a hunger crisis in other parts of the world—not in America.

FACT: 37 million people face hunger in the United States. That’s more people than the entire population of Canada. And it means that across our nation, people simply can’t make ends meet. High housing costs, rising food prices, and unexpected expenses have left millions unable to stretch their dollars far enough. Sometimes they can put a warm meal on the table after a long day—and sometimes they go to bed hungry.

MYTH: People who face hunger in America are typically homeless and unemployed.
FACT: Most of the households we serve are not homeless, and they have at least one working adult. Even with a job and a place to call home, many people struggle to get by due to challenges like underemployment, stagnant wages and rising costs of living. According to a recent report by the Federal Reserve Board, if faced with a $400 emergency expense, 40% of American adults would either need to borrow money, sell something, or not be able to pay their bills. Feeding America is committed to helping households weather life’s storms. When the car breaks down, a health emergency happens or a hurricane hits, we make sure people have the food they need to get back on their feet.

MYTH: Hunger is most frequently found in cities.

FACT: Hunger is common in rural areas—including some of the farming communities that grow America’s crops. Seventy-nine percent of the counties with the highest hunger rates in America are in rural areas. Limited access to jobs, transportation, and education make it tough to earn a living in remote areas like rural Alaska. Some are forced to choose between paying for groceries or other essentials like heat. This is an especially difficult choice for parents during the winter, and it’s all too common.

FACT: By reducing food waste in America, we can also help reduce hunger. Seventy-two billion pounds of good food goes to waste each year in America, while at the same time, 37 million people struggle with hunger. Feeding America works with food companies, farmers and other generous partners to rescue more than 3 billion pounds of food each year and help deliver it to families in need. We believe that rescuing food from going to waste is critical to solving the hunger problem in our country.

MYTH: I can’t do much to help overcome challenges like hunger and food waste.

FACT: Individual actions add up to make a significant impact. There are many ways you can help Feeding America fight hunger. After all, the compassion of supporters and volunteers like you enables the Feeding America network to feed millions of people every year across the United States. But there is still much more work to be done.